Part of the reason I've been so infrequent on this blog is because I've run out of ideas for making book recaps sound interesting--I'm enthusiastic for the books, but less confident in my blogging style.
Fortunately, I've been taking notes on how authors of some of my favorite book-snark blogs keep their readers interested. I have some ideas, so next time I'm at the library I'm picking up a Nancy Drew book and posting it here.

In the meantime, I will be updating the booklist and editing some of my more rambling recaps.
Posted by RiiverHeightsFangirl at 3:28 PM No comments:

#44 The Clue in the Crossword Cipher

I know, I said I would be back but I didn't stick around long did I...but I'm back for real! I experienced a temporary loss of interest in Nancy Drew books because I've been obsessed with Vatican-centered suspense novels lately (thanks a lot, Dan Brown) and reading every one I can get my hands on. But I digress. 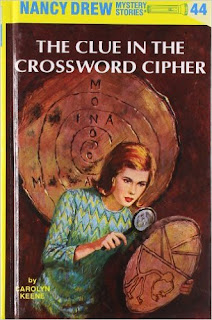 I had to force myself  to finish this one. The locations in this book are interesting but this is the book's downfall: 90% "travel guide" dialog about South America, 10% actual plot. The Nazca lines, for example, are interesting but writing about them seems to be just padding out the story. They have no import in the plot at all. Other international Nancy Drew titles occasionally stray into this territory but not this far!

Oh, and at the end of the story, Nancy, after conveniently stumbling through random clues, finds a treasure in South America that the goverment has been trying to find for hundreds of years. Of course.

Cover image is from Amazon.com
Posted by RiiverHeightsFangirl at 8:55 AM No comments:

#1 The Secret of the Old Clock; revised with comparison

The is the very first Nancy Drew book I ever read, and I'm finally going to compare it to the original.

It starts out very different from the original, which opened up with Nancy and Mr. Drew talking about the greedy Tophams and the Crowley will dispute. In this, Nancy saves a little girl, Judy, who's run into traffic and then fallen off a bridge (she doesn't appear in the original). The Turner sisters from the 1930 text are back, but are Judy's aunts.

Nancy's introduction to the Hoover girls starts with Nancy nearly running over Allison Hoover as Nancy drives into the barn to take shelter from the storm. The Hoover girls' storyline remains much the same as in the original 'Clock' except that Allison wants to take singing lessons instead of growing a chicken farm.

Abigail Rowen gets a little more "screen time" here after she furnishes the most important clues of the case to Nancy. From that point the story basically follows the original, but is faster in pace. Jeff Tucker, the groundskeeper for the Topham cottage where Nancy finds herself locked up, is no longer a minstrel-show-type black man, but a generic elderly man. The story concludes as it did in the original, with some minor changes to the Crowley will.
Posted by RiiverHeightsFangirl at 11:32 AM No comments:

My brother gave me an Amazon gift card for Christmas. I'd recently re-read the Applewood Books reprint of the ORIGINAL Secret of the Old Clock and decided to get one for my very own. Lo and behold I actually received an ORIGINAL original. I guess whoever does the stocking/shipping for the book seller I ordered from hasn't got a CLUE about what an original edition is. :P 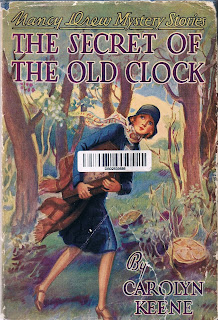 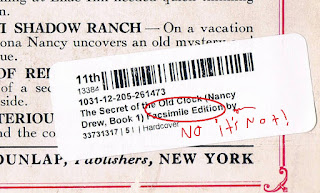 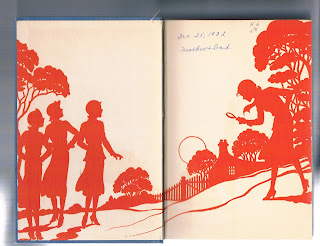 Check out the inscription ^

Posted by RiiverHeightsFangirl at 2:04 PM No comments:

This little adventure starts out in rather a mundane way: Nancy and some neighbors are planning on giving a little gift and some cash to their favorite, elderly mailman (or in PC terms, postal worker >:p), for he is retiring. Ira Dixon has a perfect record, buuuut...when visiting at Nancy's place along with Bess, George proclaims: “I hope his record isn’t marred the last day or two.” How subtle, beause just a few minutes later, Ira comes by with Nancy’s mail, and Nancy invites him to stop for a tea and snack. Upon the invite he leaves the bag of mail on the front step. Can you see where this is going? Is the Pope Catholic? Nancy and Ira find themselves at the post office, and the Jesse Cutter, the head postman, understandably, is furious and goes a bit overboard in showing his rage, to Nancy’s disgust. After berating Ira and Nancy, detectives are sent in to speak to the two. When Nancy announces her name to the detectives, Jesse stares (he was so angry that he missed Nancy’s  name in the beginning) and immediately brings a more polite attitude. Because Nancy is the daughter of Carson Drew, lawyer extraordinaire!

Nancy opens her letter, and finds that it is from an English law firm; addressed to "Nancy S. Drew" it reveals that this Nancy Drew has just fallen under a large inheritance. Nancy starts a search for the other Nancy Drew.

But that isn't all Nancy has to deal with—Mrs. Sheets, a neighbor from a quite less elegant street than the Drews live on, comes bustling in to scold Nancy for her foolishness and to tell her about how careless, lazy, self-entitled and “uppity” the “young folk” are, especially (it implies) once of Nancy’s class. Mrs. Sheets lost $10 in that sack of mail, which her sister-in-law sends weekly to supplement Mr. Joe Sheets's rather erratic income. Mrs. Sheets just won’t shut up and Hannah threatens to whack her with the broad side of a broom (yay, Hannah!) Mrs. Sheets calms down when Nancy can get a word in to say that she’ll give Mrs. Sheets the cash back on the spot. Mrs. Sheets then tells Nancy that she once met another Nancy Drew when she ran a boarding house in New York. This Nancy Drew was from England, and eventually became a governess.

In short, in going to a football game that Ned is playing in, Nancy gets a lead on the Hutchinsons, a family that employed the other Nancy Drew as a governess, and this Nancy Drew is traced and given her inheritance. The Ira Dixon plot, which seems completely useless, is wrapped up fairly early, though the conclusion isn’t until the end; Ira’s brother, who is wrapped up in a shady money-making scheme, stole the pouch, though the reason is not clear, except for the sake of being malicious. What surprised me, however, was that Edgar, unlike other Nancy Drew felons, did not end up in jail, but jumped into a river to escape the police, and “was never seen again”. I actually liked this bit, because the “bad guy is arrested and brought to jail and all is happy” formula gets a little boring.

I know that this post may seem a little dry. Nancy's Mysterious Letter is well worth reading, but predictable.
Posted by RiiverHeightsFangirl at 5:03 PM No comments:

#1: The Secret of the Old Clock: original text

Here it is, number one, numero uno, the beginning of the Nancy Drew legend. I thoroughly enjoyed both versions but I must say, the original introduction to our favorite sleuth is much more engrossing than the revised. So, onwards!
~~~
The story starts with Nancy and her father discussing a possible missing will of Josiah Crowley. They believe something is afoot, because Josiah left all his money to the Tophams, a family who took care of him for three years until he died. The Tophams were nasty to him, and it was thought that they only tolerated him for his money. But Carson and Nancy (and more than a few others) can't believe he didn't provide for other friends and relatives.

Later, Carson puts Nancy in charge of delivering super-important legal documents to a judge in town. The judge invites Nancy to "luncheon" (used as a verb) with him and his wife. I luncheon, you luncheon, he she, it luncheons... :). Nancy takes a scenic route home, but misjudges the weather and ends up stuck in pouring rain. She sees a barn by the road and drives into it. There, she is invited into the house by a girl about her age. Inside, Nancy meets the girl's sister. Grace and Allie Hoover are really trying to make do with what they have: a flock of egg laying hens, a vegetable garden and the occasional dressmaking order for Grace. Then Nancy comments on a beautiful picture hanging on the wall and--guess what--Allie says that "'Uncle Josiah" gave it to them, and that she is confused why he didn't provide for them when he died. Josiah wasn't really their uncle, but apparently cared for them very much and promised that he would help them out. Oh, and Uncle Josiah is Josiah Crowley. Surprise, surprise.

Nancy goes shopping to clear her mind of the case, and she happens to see Isabel and Ada Thopham. When Nancy was in school, they were very disliked, especially when they tried to blame Nancy for misbehavior in school at one time. Nothing has changed; the girls are still very spiteful. Ada accidentally breaks a vase and blames it on the "salesgirl". The manager is about to exonerate Ada from blame when Nancy steps in and is Hero of the Day. Later, Nancy is strolling in the park when she overhears the girls confidently assuming that there is no other will.

Nancy finds other relatives and friends of Josiah Crowely, all of whom state that Josiah had promised them part of his estate. One of them is Abigail Rowen, an elderly lady, whom Nancy finds fallen on the floor of her house with a sprained ankle. Abigail, so Nancy buys "almost ten dollars worth of groceries". Ah, inflation, how I've missed you. After a few senile moments, Abigail tells Nancy that Josiah said a notebook was hidden in a clock, with information about the missing will in it.

Long story short, Nancy finds out that the clock belongs to the Tophams, and that it is at the Tophams' summer cottage. Nancy finds and enters the cottage, discovers that there are robbers at there, gets locked up, frees herself, scolds the Jeff Tucker, the drunken "negro" caretaker, and outsmarts the police in finding the robbers. Everyone gets Josiah's money--except for the Tophams, who have lost much of their own money in risky stockbuying.
~Image from Series-books.com ~
Posted by RiiverHeightsFangirl at 1:10 PM No comments:

The revised edition of The Hidden Staircase is almost completely different from the original. Characters from The Secret of the Old Clock do not appear, and the elderly ladies from the original editions are now Helen Corning's aunt and the aunt's mother. These women are more well-composed in this edition, and plan activities to cheer Nancy up as she waits for news of her father. Nancy visits the mansion (now called Twin Elms), but somewhat more "campy" events (such as a scary owl appearing in a room at night) happen, and the "ghost" is not Mr. Gombet (now Nathan Gomber ), but a man named Willie Wharton, who is loosely connected with both the railroad property case and is the "ghost"--working in cahoots with Mr. Gomber. Mr. Gomber doesn't have a servant who helps him with his wily ways, but works with tow other men.

Posted by RiiverHeightsFangirl at 7:24 PM No comments: